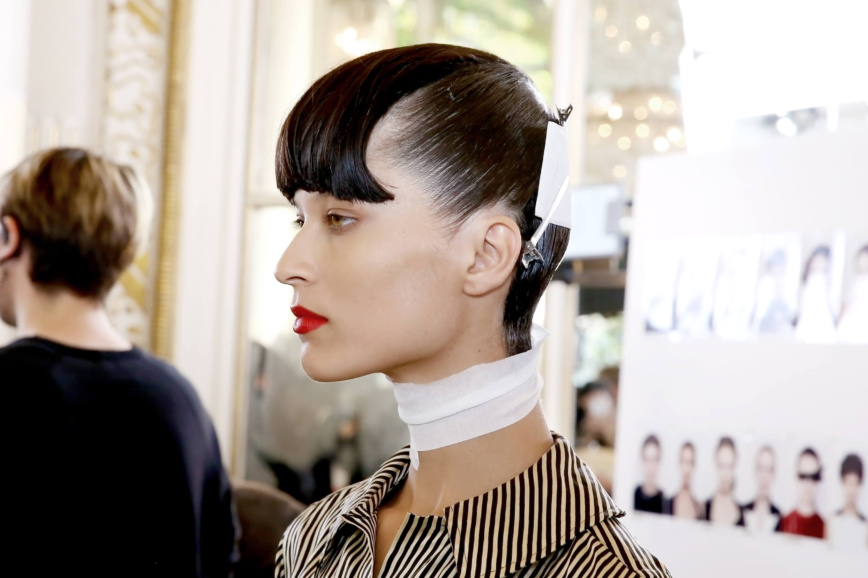 We often take a fashion show at face value – that is, the six high-energy minutes where models pound the runway in one perfectly orchestrated production. But the reality is that backstage, just behind the wall from where the models appear, is pure chaos. Seamstresses finishing off garments minutes before the Big Walk, models arriving late from the last show and four hair stylists working simultaneously on one girl. It’s fast-paced and there’s a huge number of people involved in pulling together a catwalk show.

This season I had the pleasure of working with Wella as their official backstage reporter in Milan and Paris. As someone who is more inclined to focus on the fashion side of things, it was a refreshing change to take a step back and look at what it really takes to achieve the overall aesthetic of a catwalk show. From effortless cool-girl hair at MSGM to fringes created from scratch at Acne, the Wella team tackled the SS16 season like pros – largely thanks to their incredibly talented Global Creative Director, Eugene Souleiman, whom I managed to steal away for 10 minutes in Milan amongst the backstage chaos.

You started out as a hairdresser back in 1982, almost by chance. How did you first get into hairstyling?

I was an art student at Goldsmiths College in London, but at the same time, I was in a punk band and I didn’t go to school, so I got booted out. The band fell apart and I really didn’t know what to do so I went to a career office, filled out a multiple choice questionnaire, had a chat with a career officer and she said ‘you might be a really good hairdresser’.

I think that’s the first time someone has taken their career advisor’s advice.

Well, I was clueless; I really didn’t know what to do. I thought ‘I’ll give it a try’ and I loved it so I went to college where I was pretty much the only guy, alongside 120 girls. When I finished college I started working in barber stores that were based in high end hotels in London, like The Grovenhouse, The Churchill and Waldorf hotel. One of the hotel managers said ‘look at you, you don’t fit in here. You need to go to a hairdresser called Trevor Sorbie that’s where you should be working’. So I got an appointment at Trevor’s salon, got my hair cut, started talking to the guy who’s cutting my hair and he said ‘let’s give you an interview’. I went there and had an interview with Trevor and he was really cool. He told me to come in a couple of days time, bring some models and do some hair, so that’s what I did. I worked as his assistant for a year, then I was working on the floor, and then I started working for magazines like The Face on weekends and it kind of just sprung out from there.

It must’ve been a good time to be in London.

How do you approach a brief when it comes to starting a show?

Briefs are all very different, and designers are all very different. Every house has its own aesthetic and imagery. I try to read the situation and read beyond the brief because I think that’s really important, so I really look at body language and the infrastructure of the companies. Then, once I’ve assessed that, I look at the brief and I say to myself ‘is this really what they want? Do they really want this or do they just think they want it?’. I give them what they want, and I also give them what I think they should have.

What is the timeframe from designer approaching you to the show? How much time do you have?

It depends on who they are. I’m doing a show in Paris for Acne and I’ve been working on that for a month, just researching. Then there’s the John Galliano show for Issey Miyake and I have no idea what I’m doing until a couple of days beforehand because for that show we have a two day fitting, and every girl has a different character because that’s really what he’s about; larger than life characters, which is a little bit of a nightmare because you always have to take into account the logistics of doing a show.

Because you’re physically preparing the looks.

And mentally preparing it. You’re trying to work out what’s going on with no information. Generally, I always think of a couture show as being the informant for the prêt-a-porter. Because the couture show is extreme, and it leads you in a mindset of where someone is. And I’m thinking, what product do I need for this? So you have to bring a lot of stuff that you feel you might need, which is a nightmare, because we’re not going from London, we’ve got excess baggage, so we travel with a lot of stuff.

And the laws now. In every country they seem to be a little bit different.

I generally think if you’re nice with the customs office, then you’re ok.

Can you tell us a little bit about Wella’s product range?

I think it’s the best we’ve produced so far; I’m really enjoying using it. There are a couple of new limited, innovative products; for example ‘Sugar lift’, which is really good. It gives you a texture, but it also gives you shine, which is quite unusual for that type of product. Then there’s ‘Dry Me’, which is an amazing invisible dry shampoo. The really good thing about the product range is that it’s great for layering one product on top of the other or actually mixing together. It also smells good, which is quite rare for hair products. Usually they smell really disgusting. But you know what? It smells nice.

What key hair trend are you gravitating towards for spring/summer 2016?

I notice that there’s a trend towards girls being individual; a lot of designers are starting to cast girls for the way they look, their own personal style. I think we’re done with that vulgarity fashion has been through. I think we’re approaching a more realistic, more personal time where the person wears the clothes rather than the clothes wear the person. It works.

It always comes to true style.

I think that’s the good thing at the moment because you don’t have to have a certain hairstyle or do your makeup a certain way to be fashionable, you can actually be who you are. This kind of homogenised vision of perfection isn’t very beautiful if you ask me. I like imperfection; I think imperfection in people is what’s beautiful, so I like where we are at the moment.

Created in collaboration with Wella 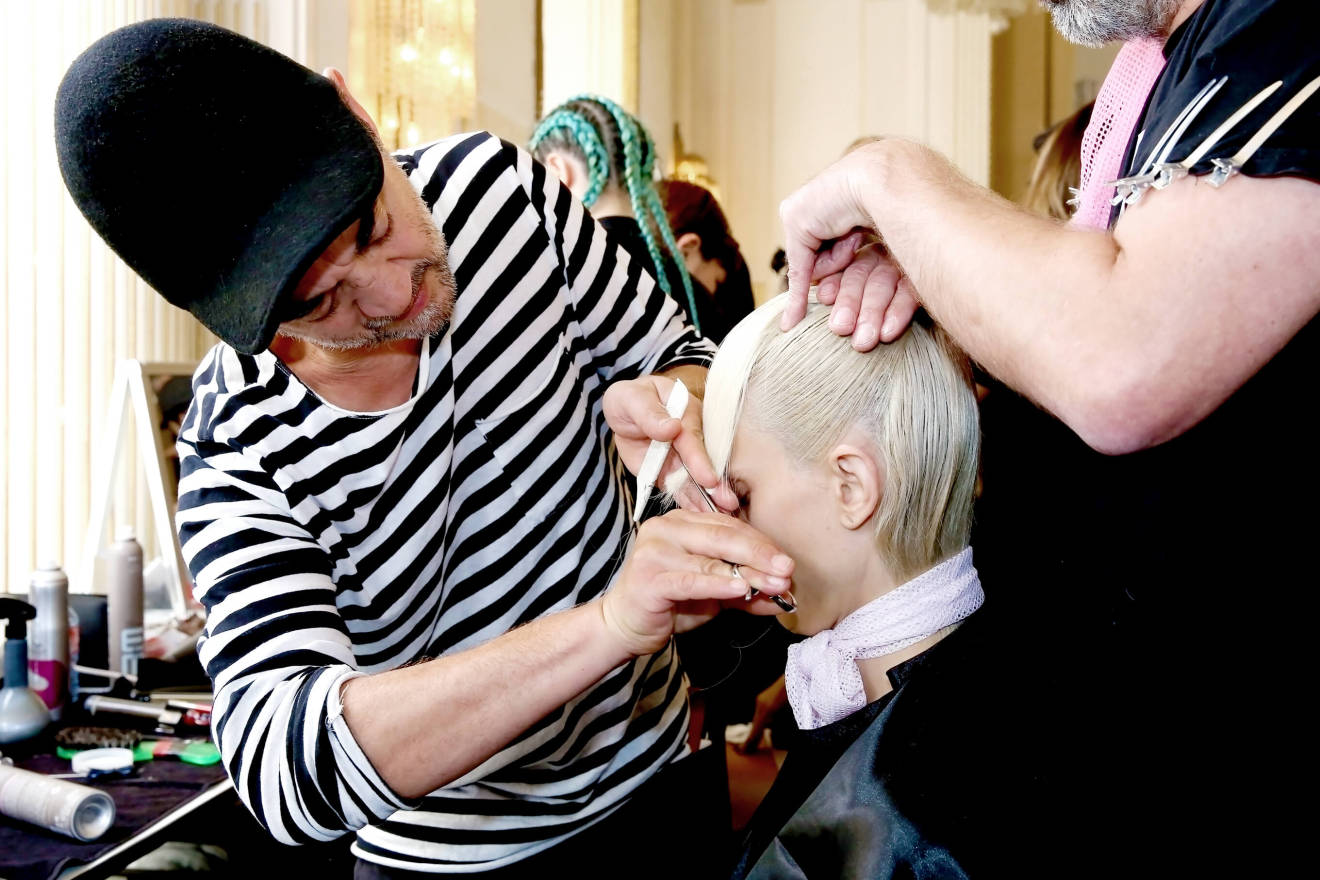 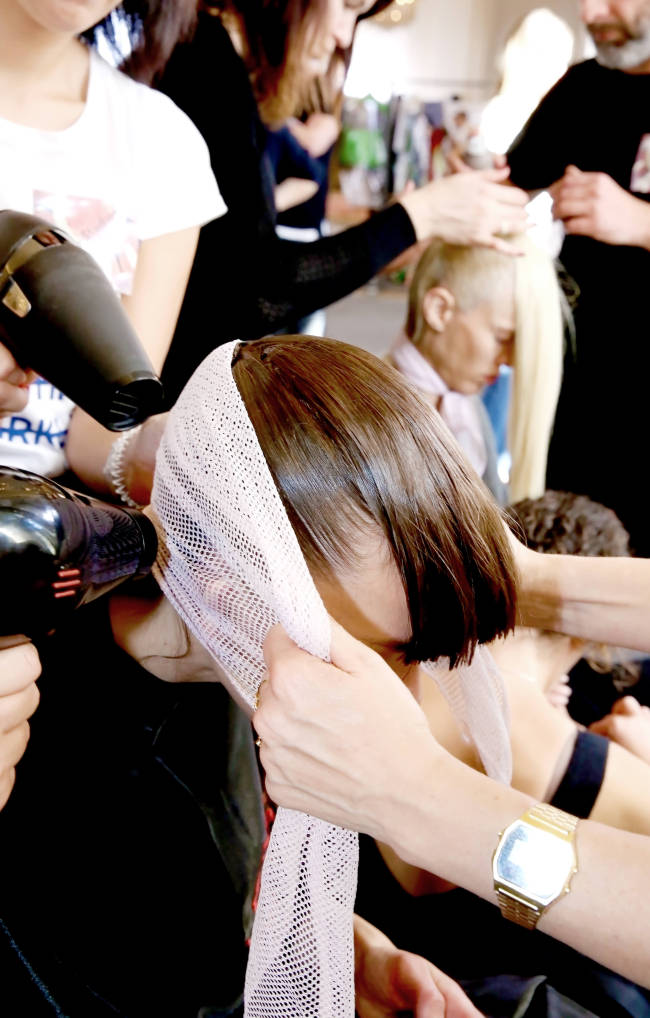 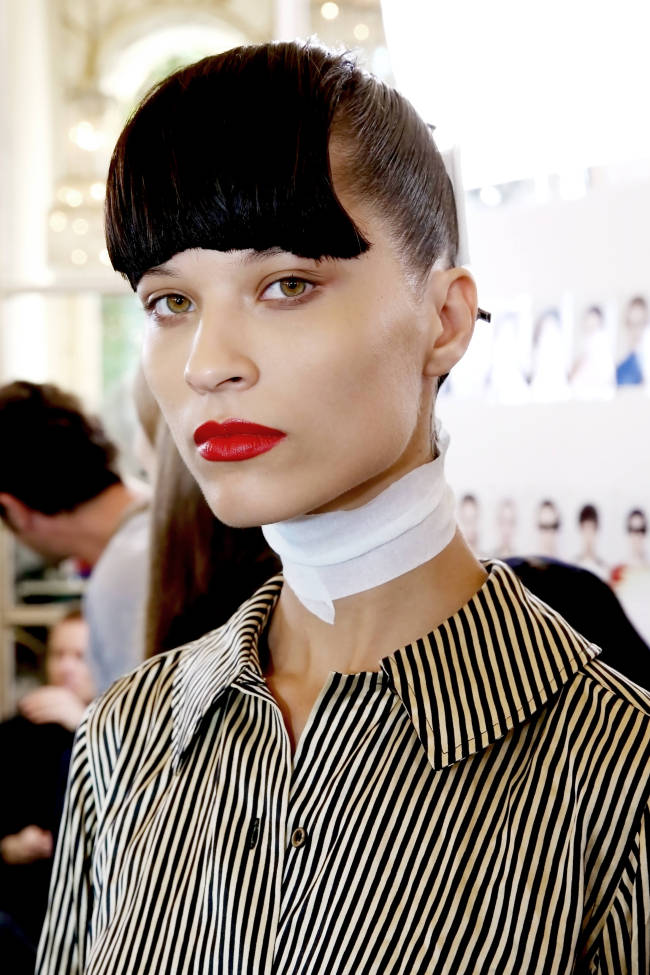 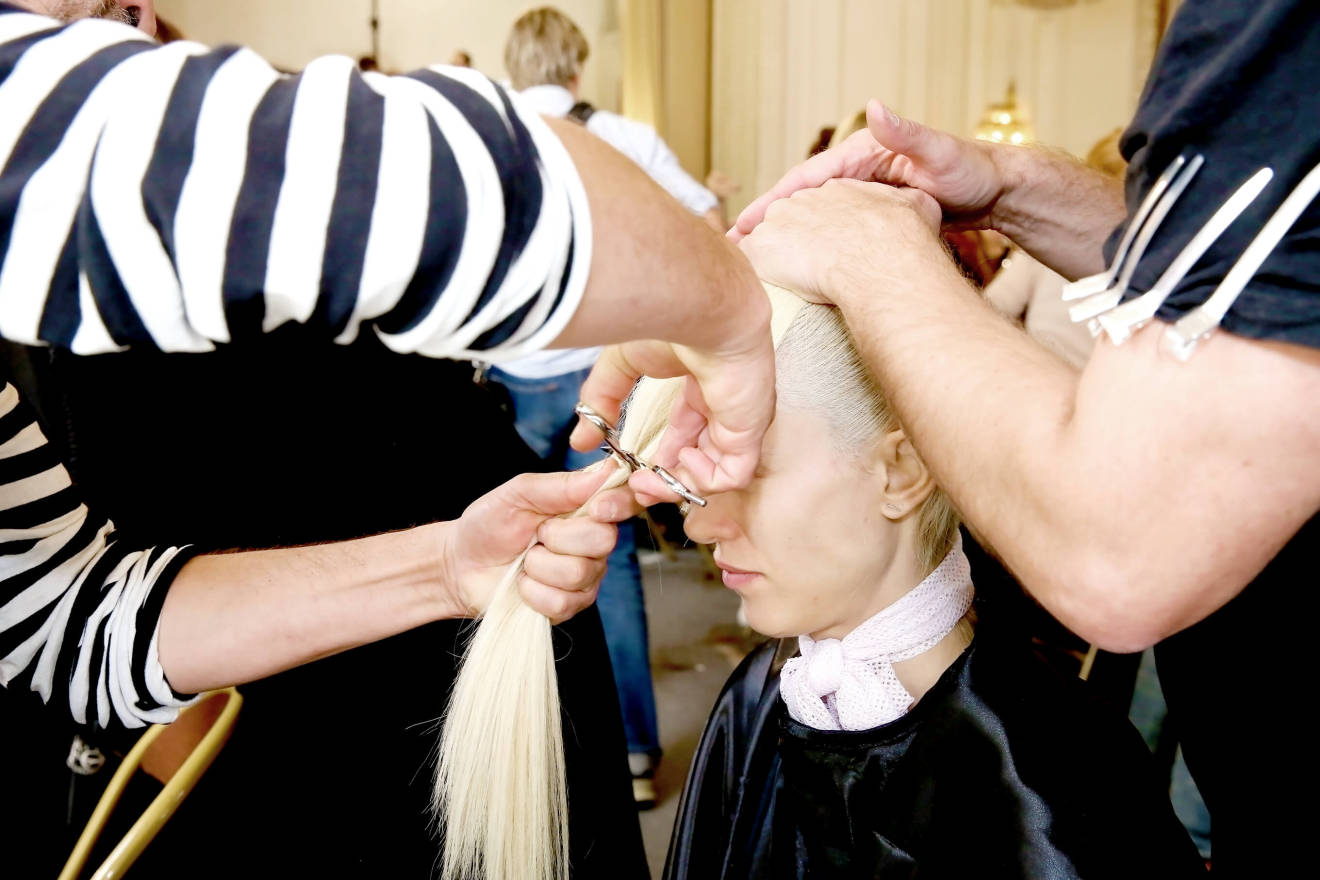 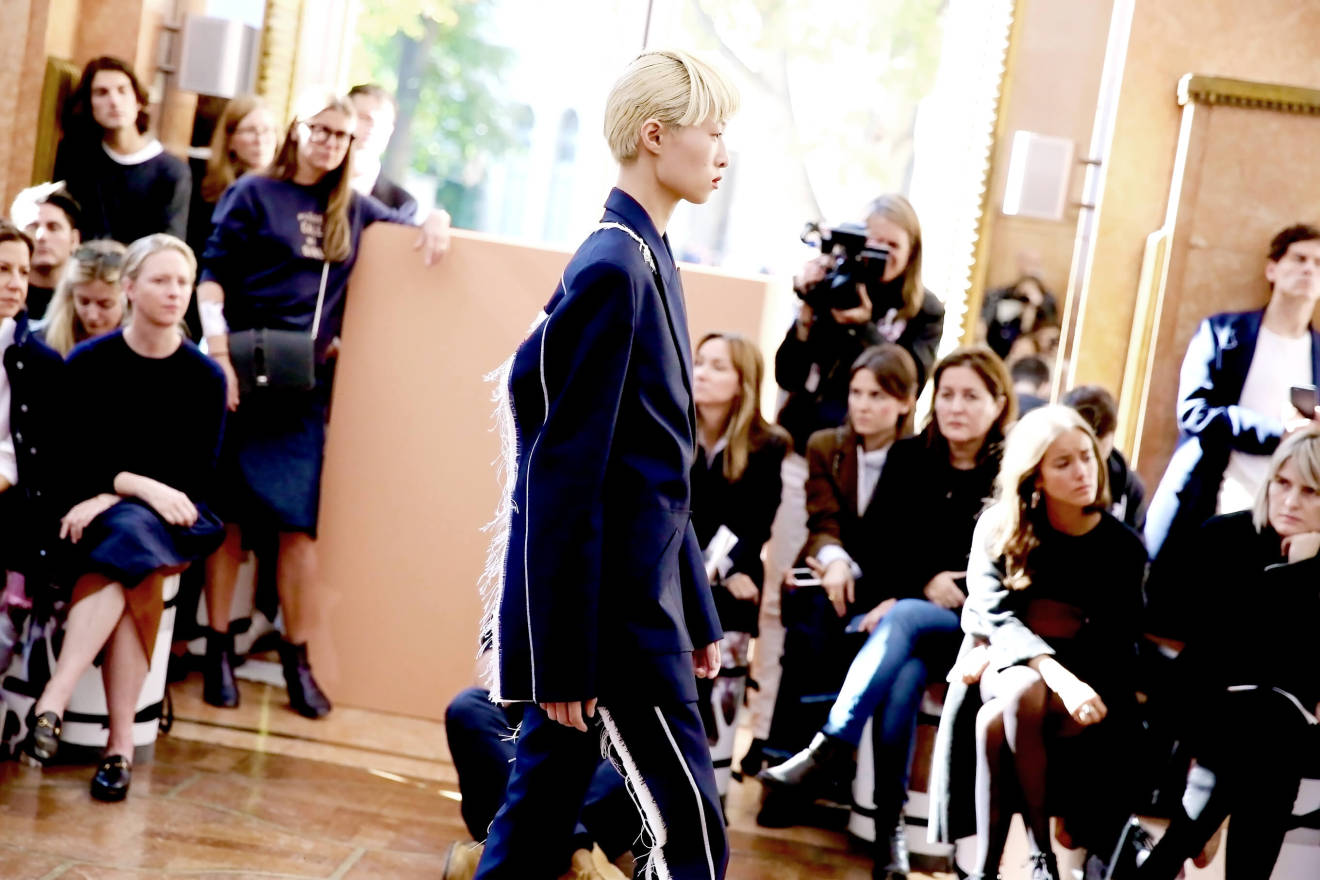 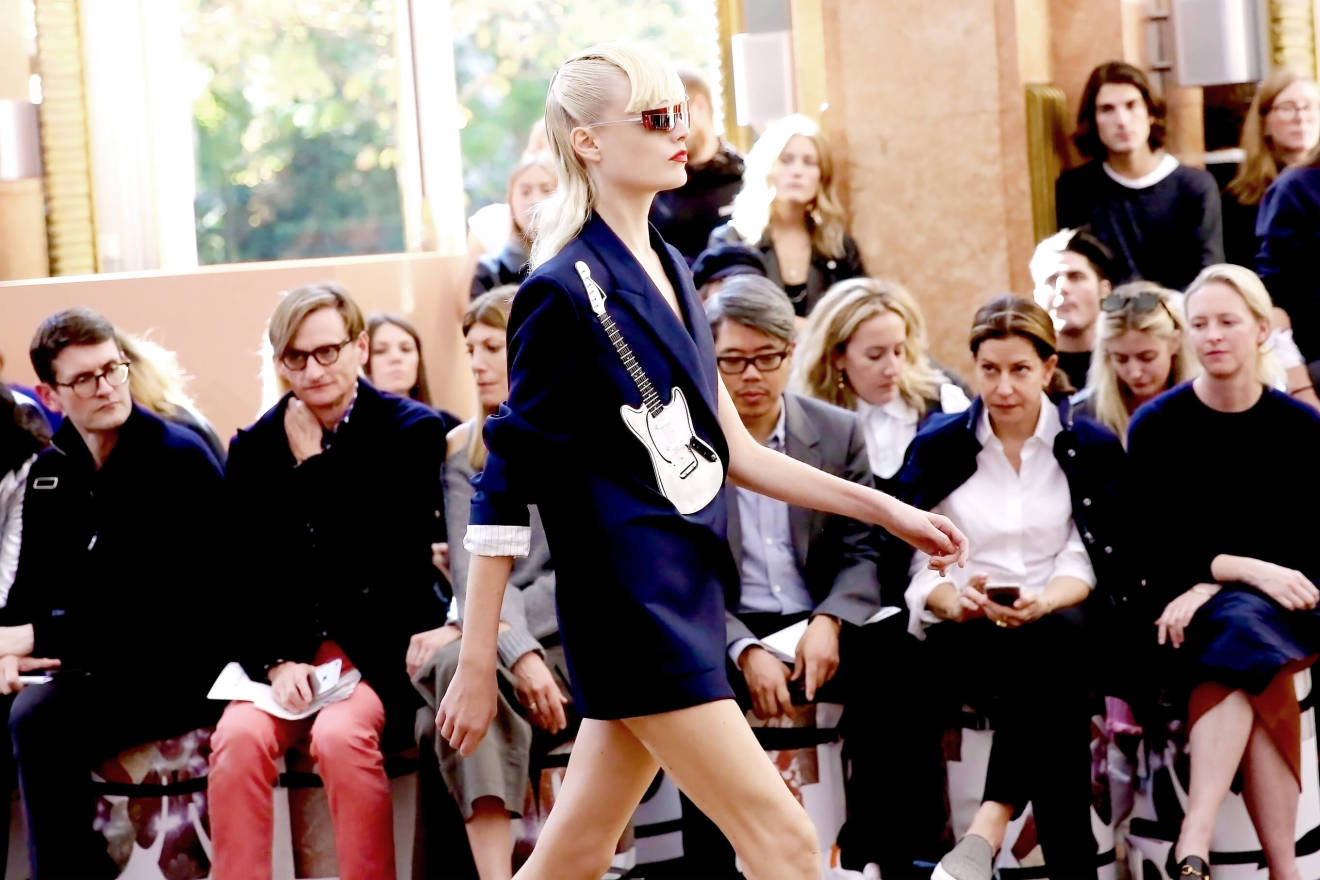 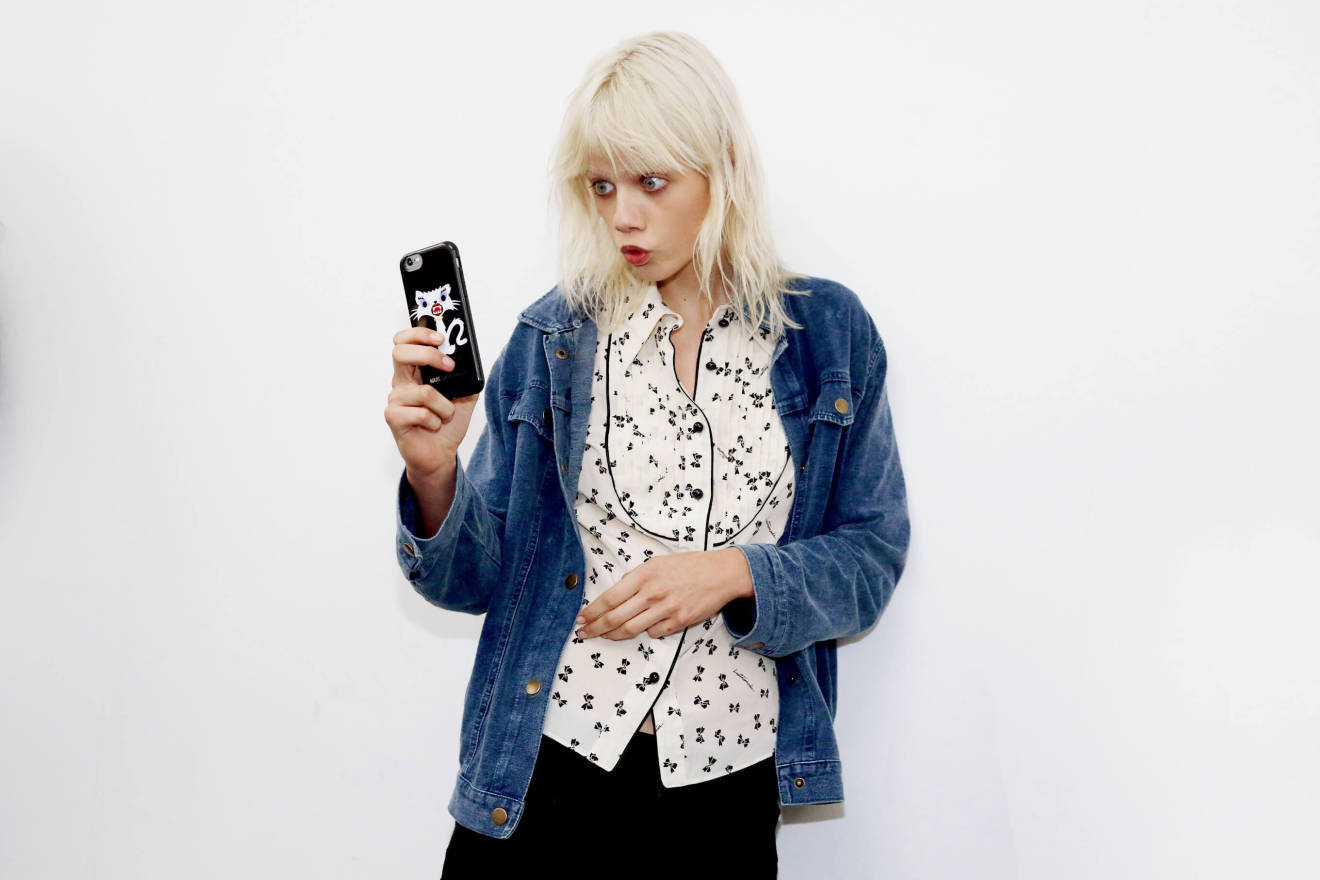 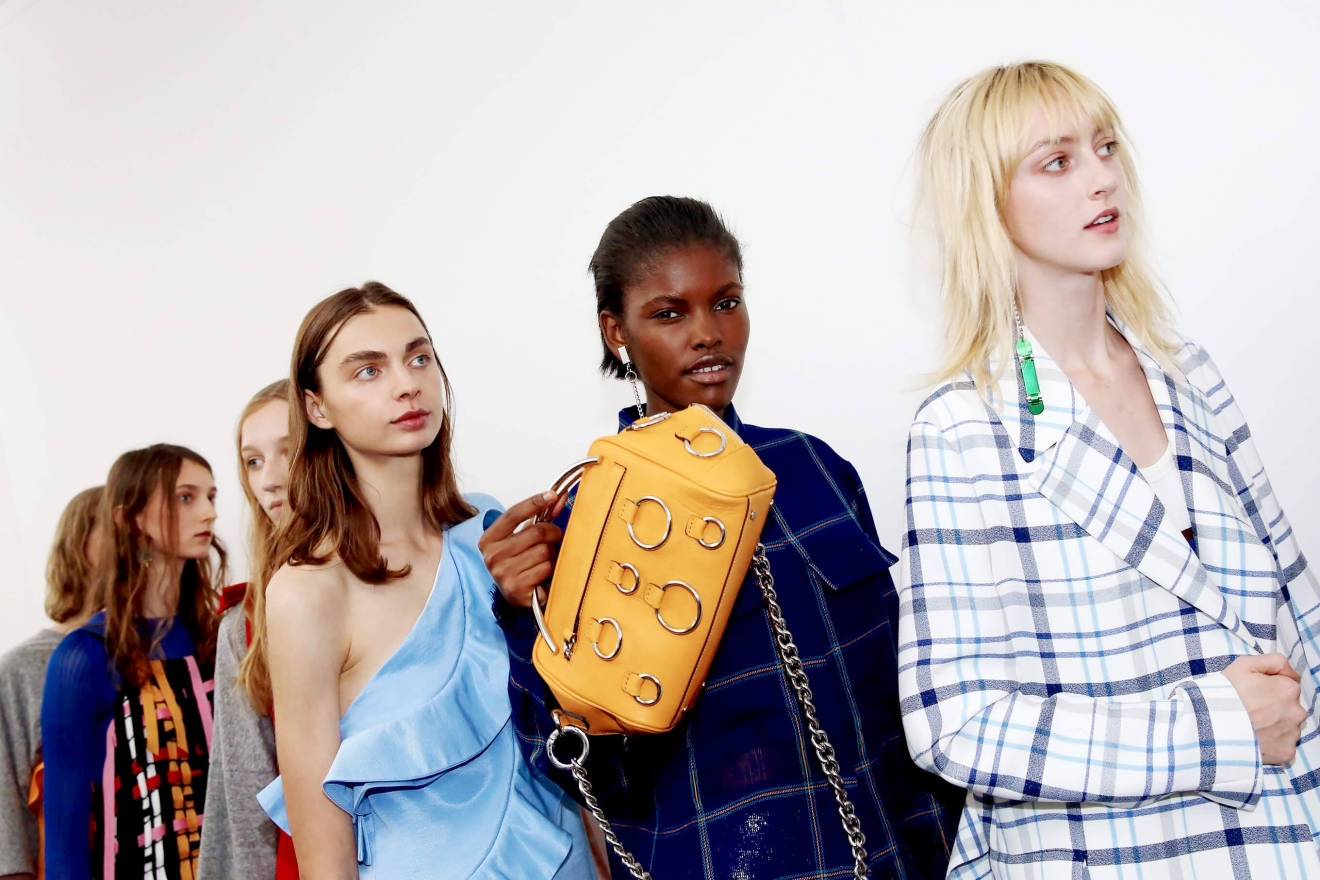 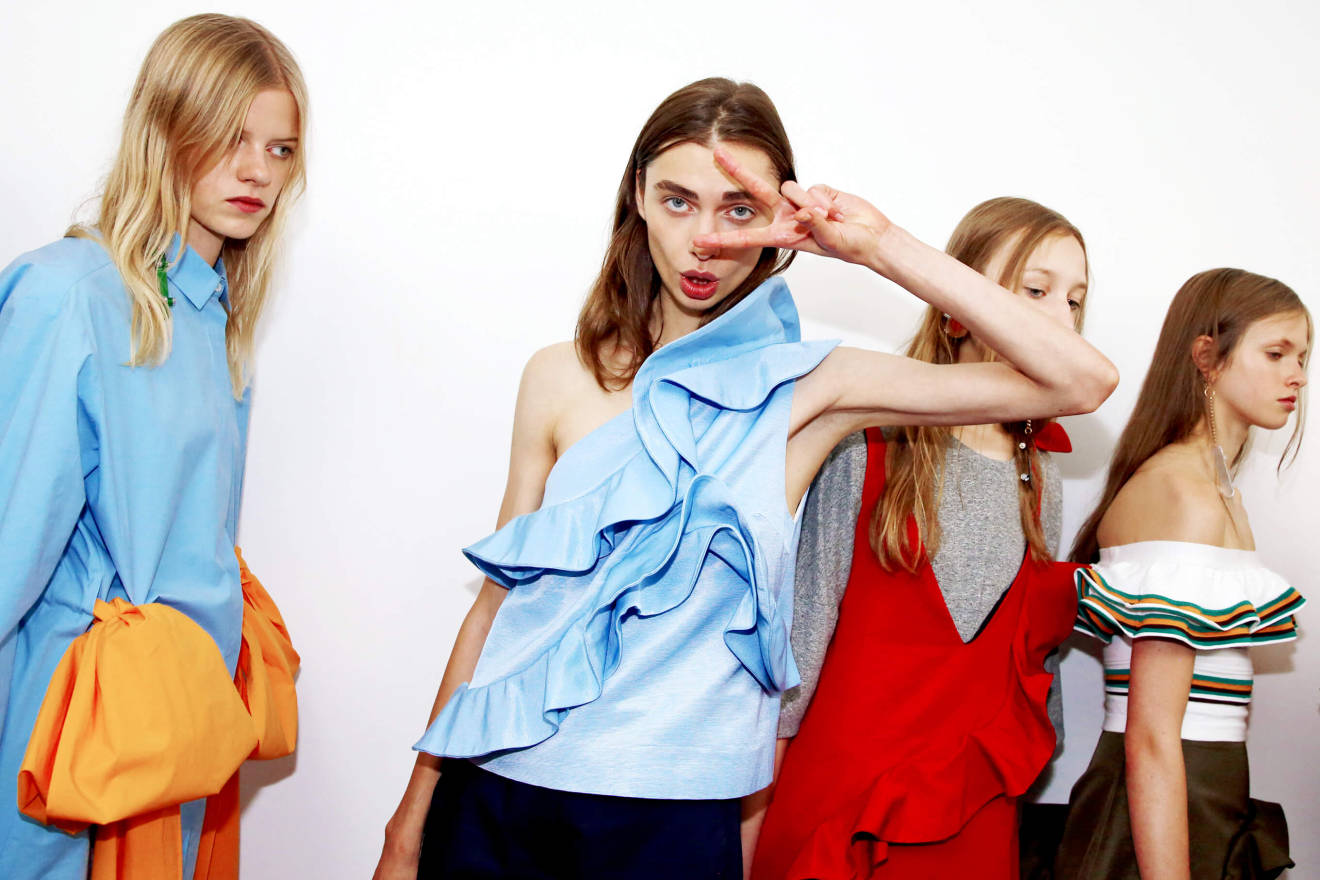 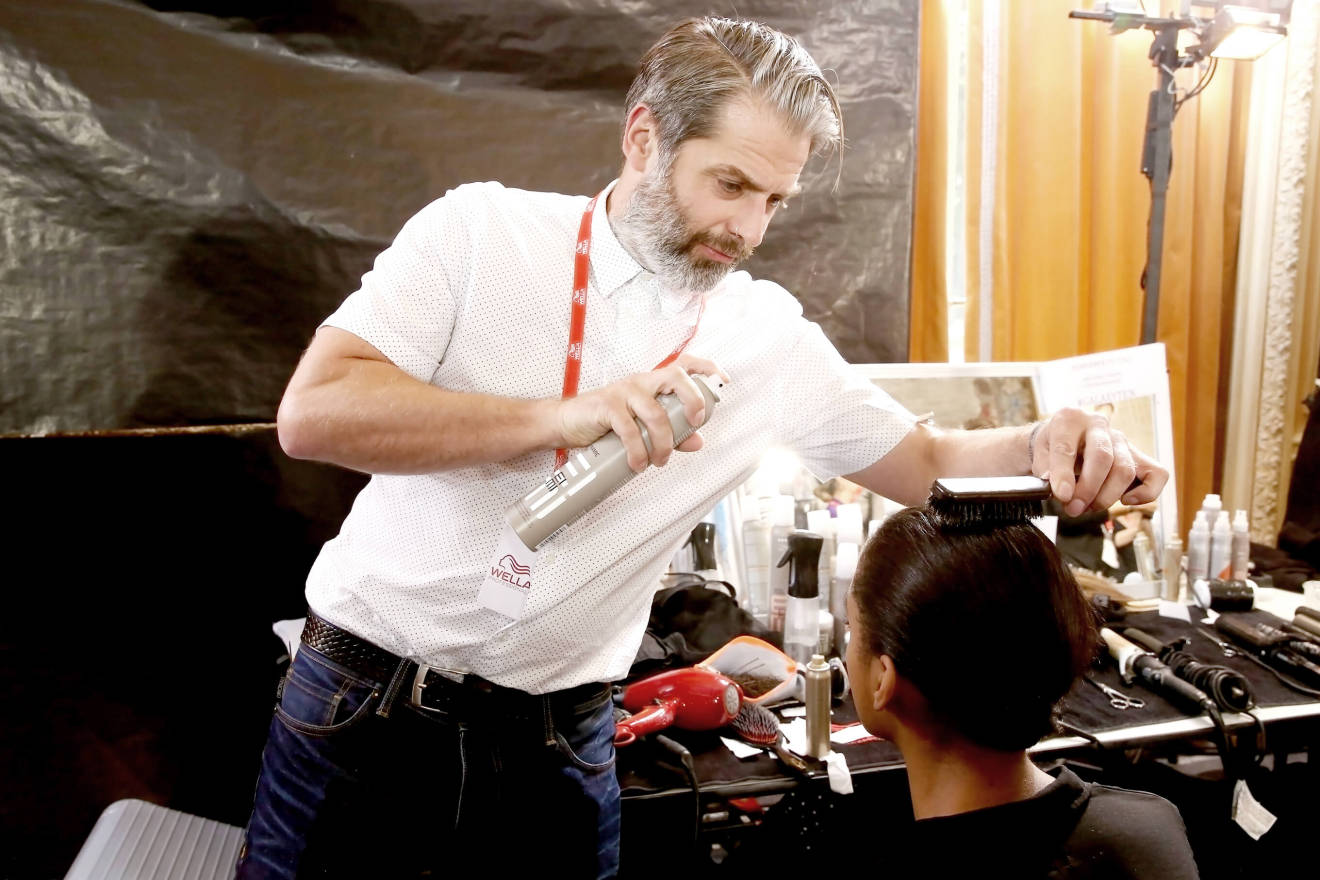 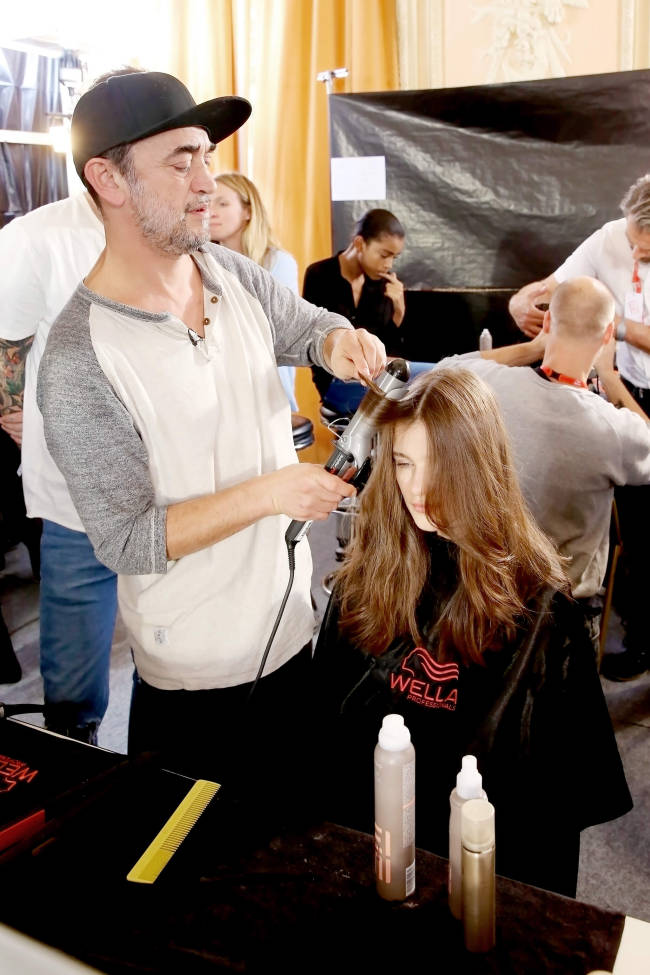 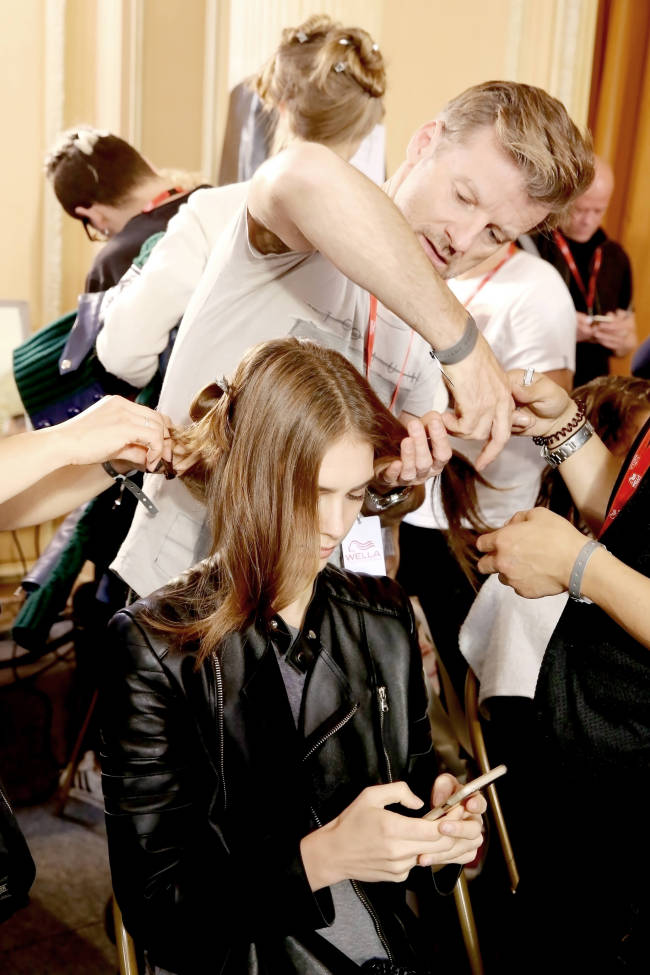